How to file divorce in MA

In Massachusetts, a divorce may be filed as “no-fault” or “fault,” and either of these can be contested or uncontested. Before you file, you must choose which type is right for you.

In a fault divorce, the person asking for the divorce must prove specific ground(s) or reason for the divorce.  The following grounds are listed in Mass. General Laws chapter 208, section 1:

This process can be more time-consuming and expensive than a no-fault divorce.

There are two kinds of “irretrievable breakdown” divorces. They are often referred to as “1A” and “1B”, referring to the section of the law under which they are found, Massachusetts General Laws Chapter 208.

The most common approach is no-fault based on an irretrievable breakdown of the marriage. There are 2 options for a no-fault divorce.

A “1A” divorce would be filed when both spouses agree that the marriage has irretrievably broken down and they have reached a written agreement with respect to child support, parenting time, alimony, child custody, and the division of marital assets. This is an uncontested no-fault divorce.

There are several important papers to file under “ 1A” category. Among them are two important documents as below:

(1) Joint petition for divorce under section 1A (CJD-101A) signed by both parties or their attorneys. 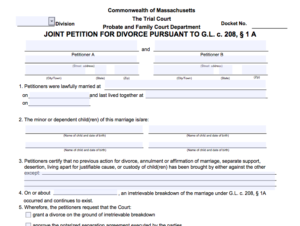 (2) Joint affidavit of irretrievable breakdown signed by the parties. 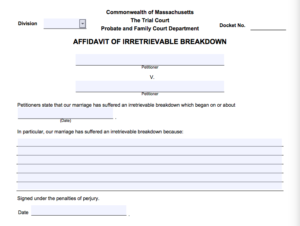 A “1B” divorce would be filed when one spouse believes there is an irretrievable breakdown of the marriage or both spouses believe the marriage has ended but they aren’t in agreement with regard to custody, support, or marital property issues. This is a contested no-fault divorce. If you and your spouse are able to come to an agreement, you can file a request to change the divorce complaint from a “1B” to a “1A”divorce.

Please find the most important papers under “ 1B”: Complaint for divorce under section 1B (CJD-101B) signed by one party.

Disclaimer: The Contents of this web site is for informational purposes and should not be considered legal advice. This web page may be considered advertising under Massachusetts Supreme Judicial Court Rules, and it does not establish an attorney-client relationship

We invite you to contact us and welcome your calls, letters and electronic mail. Contacting us does not create an attorney-client relationship. Legal advice and representation can only be obtained upon retaining our firm and the execution of a written agreement for the rendering of specific legal services. Augen Law Offices value your privacy and respect the attorney-client privilege